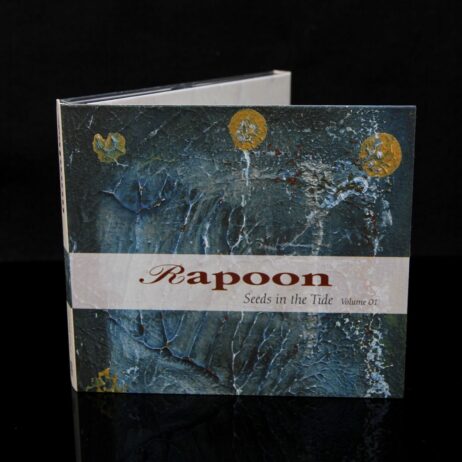 2012 marked the 20th anniversary of Robin Storey’s career as a solo artist recording as Rapoon. Since 1992 and therelease of his debut album “Dream Circle”, Robin has been exploring thepotential of post-indutrial ambience enhanced with ethnic sounds ofAfrican and Indian origin. From the beginning, a crucial aspect of his creative process has involved the use of trial-and-error techniques inspired bycontemporary experimentalist Karlheinz Stockhausen and krautrockgiants Can and Faust. With more than 50 releases he has established his reputation in the world of experimental electronics, creating elusive soundscapes too enchantingto ignore.His music, by turns evocative, atmospheric and mesmerizing, hasgained devoted followers all over the world, including in Poland, inZoharum’s headquarters. Together with Robin Storey they have prepared this firstvolume in a series of archive releases celebrating 20 years of Rapoon’sexistence.”Seeds in the Tide” collects all of the rare tracks released oncompilations and short-run limited editions. The first disc in this double CD collection, “Keepsakesand Oddities”, contains tracks recorded between 1993 and 1999. The seconddisc is a reissue of the ultra-limited CDR version of the well-known”Messianicghosts” album. It includes the original versions of the fourtracks from that album that are significantly different from their latervariants.