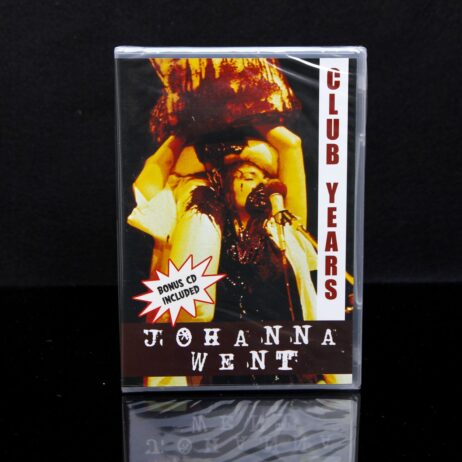 Johanna Went is a pioneering performance artist who began performing as part of a street theater troupe that traveled America and Europe in the 1970’s. Following her years on the road she settled in LA in the late 70’s and began transforming her street theater performances into what would become her signature style. Using found props and hand-sewn costumes she developed a wild stage act that included live musical backing from legendary performers such as Z’ev and KK Barret of the Screamers.

In 1979 she began working with the Wheaton brothers (Brock on drums and Mark on syntheziers) who arrived in LA that year from Seattle with their band Chinas Comidas. To this day Mark continues to work with Johanna as her musical director.

Combining a wild, chaotic performing style packed with visual excitement, gallons of blood, streams of multicolored liquids, giant bloody tampons, enormous sewn fabric sculptures, wacky scary costumes and enough Styrofoam and found film stock to fill a room, Johanna packed the clubs in LA, San Francisco, Seattle, Phoenix and New York. For more than ten years she was known as an innovative performance artist, particularly for the visual richness of her on-stage characters. She was equally renowned for her use of live improvised music that crossed over from jazzy rock grooves and jungle beats to electronic soundscapes and industrial noise. And always, above all the wild, driving music: Johanna’s completely stream of conscience vocals.The DVD’s main attraction is its 80 minutes of live performance footage shot on video tape at clubs and galleries in the Los Angeles area from 1977 through 1987. The eight performances range from an early and very raw solo performance by Johanna Went at a small store front club to a pair of performances video taped by Academy Award winning avant garde film director Shirley Clarke. Bonus material includes entertaining and informative audio commentary for each track, recorded by Johanna Went and Mark Wheaton, a slide show of classic live performance photos, and a page of web links accessible when the DVD is played in a computer.

The recordings on the bonus CD reveal a wacky sense of New Wave insanity that reminds us of the Residents if they were a punk band backing Ornette Coleman. It collects for the first time all of Johanna Went’s studio recordings written and produced by Johanna and her musical collaborator Mark Wheaton. This includes the complete Hyena LP, first released on Poshboy Records and now remixed and remastered, as well as the songs from their first 45rpm single originally released on Boyd Rice’s Graybeat label.