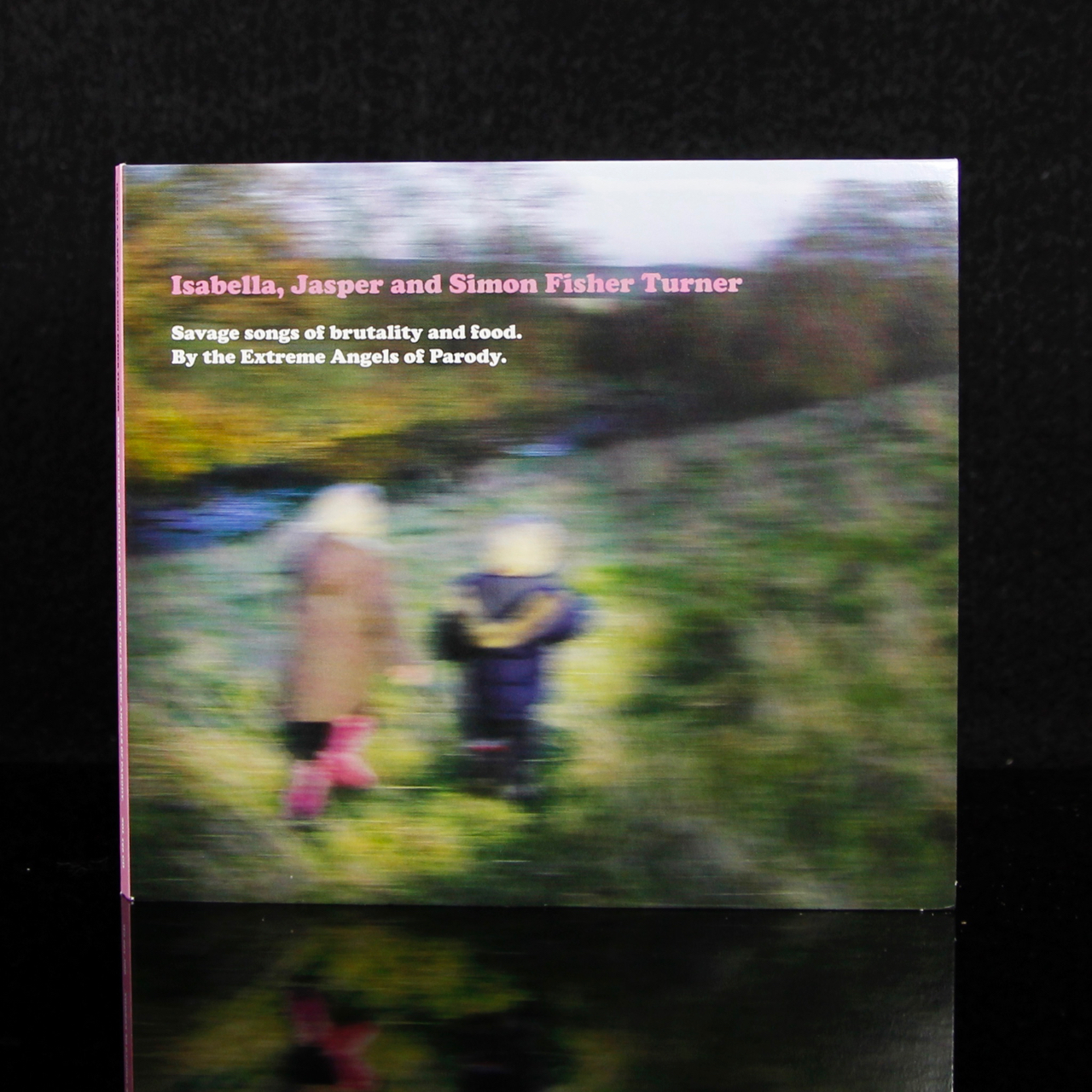 ISABELLA, JASPER AND SIMON FISHER TURNER – Savage songs of brutality and food. By the Extreme Angels of Parody.

This is the blurb.
I think it’s a press release, too, about this album I’ve made with my kids’ voices and sounds and these home recordings we’ve made over the last 13 years.

They’re now 15 and 17 and who knows what they think.
I know they’re not too interested in it this now, but they’ve seen the artwork and pictures and obviously they know the tracks, but I don’t think they actually realise this is coming out and that strangers can buy the LP in a Record Shop or online with actual money.

For years as the two of them were growing up I was always photographing and recording their lives. Over 68,000 pictures on my desktop, and hours of recordings. This is commonplace now, but when I was growing up maybe the Brownie would come out on the beach on Whitsand Bay, or if we went on holiday, a picture of a mountain or something interesting like, a pizza. Mum had a reel-to-reel she never used, and I had a radio. Dad was underwater.
Why go on holiday when you live in Cornwall. Dad was a submariner based in Plymouth and my mum was a mum and a Rally driver. Three boys to look after. Chaos and serious hard work. Now both my parents are dead, I’ve photos from mum’s albums, but oddly enough Dad never took photos at all, and distrusted them I think.

So to this album. It’s the first thirteen years or so of our children’s lives made into cute and cruel songs of experimentation and, yes, chaos again. So, from the first heartbeat (not included here) to just under two years ago, I randomly and sometimes secretly recorded them singing or talking, often encouraged of course by me. That’s what parents do. I recorded for 13 years. It’s rather wonderful to have sound documents as opposed to pictures. Luckily I have both and I’m still rediscovering forgotten sounds even now.
This is a music/sound diary (perhaps) of the frankly mad, cute, annoying, moving, innocent, loud, loving, embarrassing, noises of their lives up to now, as recorded and messed up by me, as in messed-up-and-I-don’t-care, but do I care. I try to edit with clarity where needed, but otherwise the vocals and ideas are pretty raw and unaltered for the sweeter market of pop. This is just STUFF. Wild and Alive.
Rebels without a pause.

I was a dad with slithers time on my hands and a Mac I could barely understand. I made tracks/songs, whatever you want to call them between cooking, cleaning, bathing, shopping, driving, and sleeping ad infinitum. It’s the three of us mainly, with The Elysian Quartet thrown together for The Mighty Dinosaur song, but I’m the leader, the captain of the ship. You always need a Captain and they were my sonic crewmates, even though they were often press-ganged into service reluctantly.
.
There will be no Volume Two.

They’ve eventually got really fed up with me doing this, and I can’t blame them one bit, but when faced with all these bits of songs or, fragments of stuff, what do you do? Throw them in the bin, give them to them on their wedding day and really make them cringe?
No. The best thing to do is to compile them like a mix tape and keep your fingers crossed that someday, someone might be interested in releasing a compilation of this madness.

Charles Powne from Soleilmoon Recordings came to the rescue, in that he mentioned somehow whether I’d heard of an LP of children’s songs. I hadn’t in fact, but I told him about these recordings I’d been making over the years.

Isabella and Jasper I think are now probably incredibly pissed off with me, but you know, that’s tough. Full stop.

Now at 17 and 15 their childhoods are over. The illusions shattered. There is no pretence. They can watch the news, Snapchat at speed, and lurk on the net who knows where.
Innocence has gone, battered out of them by schools and the more serious and dull adults that surround them. They were the funniest and most amusing two smaller people imaginable, but now, they’re Teenagers…….Aaahhhhh.
They’ve opinions, they’re brighter than me, better looking, funnier, nicer clothes, better humour and taste, and they’ve more friends than me too. The job is done.

I’m sadly responsible for the musical settings they happen to find themselves in, although, quite often all the music or at least some of it is made up from their noises too. We like a noise here and there and we love to dance on a Friday night.
One of the beauties of this sort of music is that there are no rules. We could all do with this sort of freedom, in not just music, but film, cooking, and storytelling. A child’s imagination is the finest open canvas ever. No rules rule.
Oh God, I sound like a dotting dull dad. C’est la vie.

Stay well and keep calm and risk everything with passion and love.

The vinyl edition of this release includes a download code. 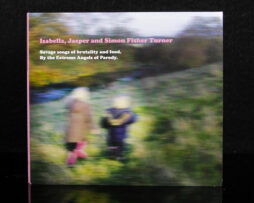 You're viewing: ISABELLA, JASPER AND SIMON FISHER TURNER – Savage songs of brutality and food. By the Extreme Angels of Parody. $14.00 – $24.00
Select options