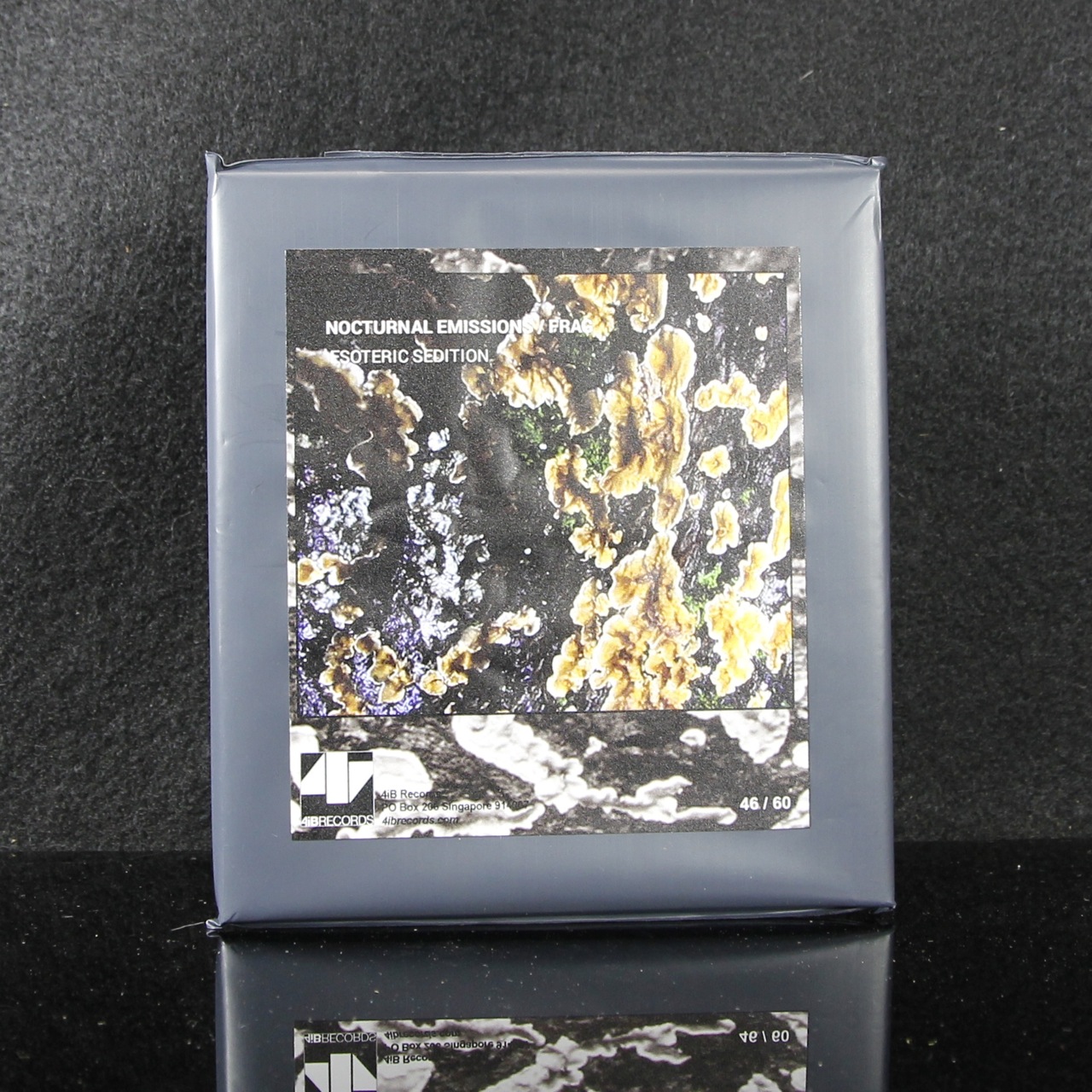 Limited edition of 300 copies, of which the first 60 come in a special plastic sleeve and numbered sticker. We are getting these special copies!

Nocturnal Emissions may be the better known act here. Their history stretches back to their early associations with the then burgeoning industrial music scene. Long before he became renowned for his role in the noise rock outfit Head Of David, FRAG’s Stephen Āh Burroughs was creating industrial music with the short lived project Comicide. Today, his main project Tunnels Of Āh is a form of esoteric electronics in the vein of early Current 93 and Coil combining Buddhist and Gnostic texts with the genius loci of place. FRAG is a newer and more prolific project offering slabs of sound on short run cassettes and CD-Rs. FRAG’s recent collaboration with Italian composer and industrial stalwart Maurizio Bianchi, almost brings this full circle since it was Nigel Ayers of Nocturnal Emissions who co-founded the label, Sterile Records, which released Bianchi’s first album and 4iB Records who released the MB/FRAG collaborative album, Psychation, as well as being the label behind this one.

The origins of Esoteric Sedition came about when FRAG approached Nigel Ayers with the idea of a collaboration, and opening with the warm lulling ambient atmospherics of ‘Wartime Summer’, it’s clear Esoteric Sedition takes its cues from Nigel Ayers’ most recent sounds, of minimal works and soundtracks for film and television. And let’s be clear, decades have passed since Nocturnal Emissions have produced anything which could be considered industrial music. Here ringing and shimmering pipe like atmospherics are shadowed by subdued grumbling textures. There’s an electroacoustic aspect to ‘Primordial Furea’ in the ricocheting gong chime and clatter of treated metallic textures set over pumping heartbeat pulse fused with spiralling noise reverberations which never overshadow the manipulated source material. Haunting synths wax and wane on ‘Telstra Sandpile’; its ominous presence deepened by the incessant crackle and click of a radiation detecting Geiger counter. It’s representative of the shadowy presence FRAG bring to the sombre, solemn sounds of Nocturnal Emissions. Up till now the brutalist noise of FRAG may have appeared absent but it becomes more prevalent on ‘Netra Mode’, where a torrent of noise is unleashed threatening to obliterate the glinting and glistening ambient electronics in a storm of distortion.

Rendering the ambient synths in distortion, ‘Nomical Index’ is quite disarming. Imagine listening to a radio broadcast where you’re not quite tuned in to the right frequency. Buzzing and fizzing, it’s all carefully controlled and designed to not overpower but to work alongside the mellow ambience. On ‘Reflexive Control’ FRAG’s textured atmospherics do become more prevalent as they continuously dart and swoosh cloaking the subtle forlorn synths in shredded noise layers. ‘Boundless Informant’ works in a similar way and it’s testament to how FRAG have approached this release. It seems rather than obliterate the release with lashings and slabs of noise, they have produced sounds and textures which are attuned and sympathetic to the original Nocturnal Emissions material. On this one they employ drifting and gestating patterns of distortion which go hand-in-hand with the gentle plaintive synths creating something alluring and quite beautiful.

A choral aspect flows through the source material of both ‘Symmetry Diffusion’ and ‘Particle Serum’. The airy cut-up manipulations of the former expanding voices into a series of tones and drones, offset by controlled noise interjections and waves of gnawing distortion. ‘Particle Serum’ is perhaps harsher, its mass of angelic voices disrupted by the oscillating shriek of whirring frequencies. The queasy disembodied piano score of ‘Ionone’ unfurls to a melodic discord of chiming notes and stabbing chords, shifting and blurring in fragmentary fashion sliced with power-tool buzz and percussive rattling and saturated in droning electronics. FRAG continually rein things in, never over stepping the mark as they bring their own noise based concrète music to enliven the source material. Assuming a scratchy, ripped form, ‘Subtopia’ could be considered glitchy if it weren’t for the fact that FRAG employ an analogue based approach. Still, it is the noise textures that create the focus here as they scratch, rip and shriek and, at times, whip up something of a noise storm over the soft focus gliding ambient synths of Nocturnal Emissions.

Ambience and gritty noise textures combine to great effect on ‘Propylene’. Due to its restless construction, I found it particularly disorientating as I struggled to focus on either the gentleness of the rays of wafting atmospherics or the fermenting niggles and churn of the distortion. Haunting and queasy in equal proportions, it’s not a track I’d recommend to anyone, like me, currently enduring the effects of vertigo. It is, however, a satisfactory end to an album where FRAG deploy noise and textures, which accompany and embellish, shroud and shadow the minimal synth work of Nocturnal Emissions. Nocturnal Emissions may have the longer pedigree in experimental and (post-) industrial music, but I consider Stephen Āh Burroughs as Tunnels of Āh and FRAG as one of the most expressive and accomplished proponents of whatever industrial music has become today. Esoteric Sedition is a wonderful distillation of both their approaches and is certainly worthy of investigation if not a full blown recommendation. Esoteric Sedition is available digitally and on CD from FRAG Bandcamp and 4iB Records 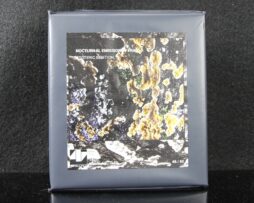