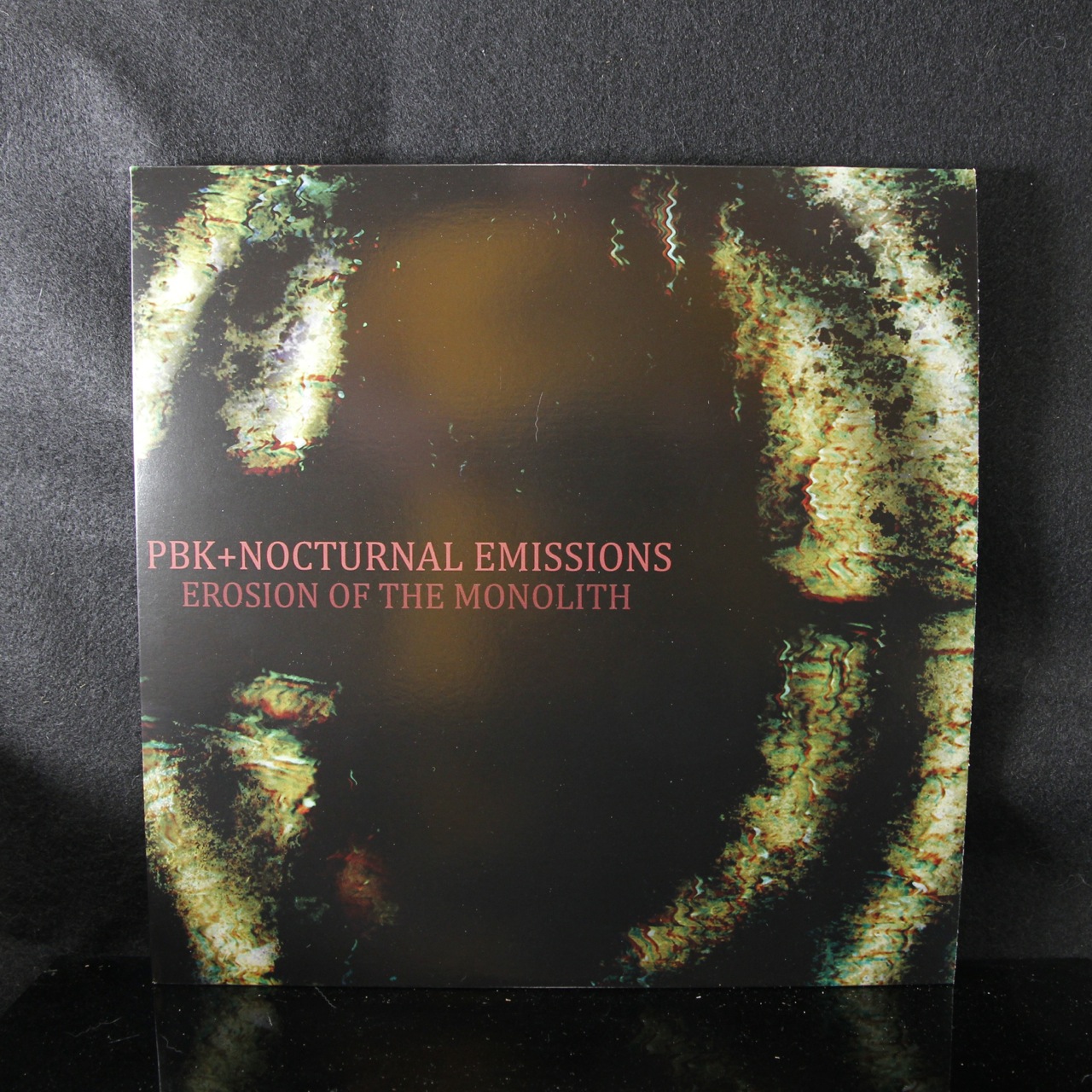 In 2004 Nigel Ayers composed two hours of audio source material for collaboration with Phillip B. Klingler. Some of the audio was utilized and appeared on several releases between 2004 and 2009. In a fit of inspiration, Klingler revisited the remaining source material in mid-2021 and completed “Erosion Of The Monolith”.

All sounds/compositions by Phillip B. Klingler + Nigel Ayers
Mastered by Andy Ortmann at Nihilist Studio

REVIEW FROM  VITAL WEEKLY 1325:
For (perhaps) the younger generation, both the names of Nigel Ayers (a.k.a. Nocturnal Emissions) and Philip B. Klingler (a.k.a. PBK) might be legendary. Still, some years apart, Nocturnal Emissions can be put in the first wave of industrial music bands, Throbbing Gristle, Whitehouse, MB, Ramleh and such. In contrast, PBK’s first releases are from 1988, when the industrial music scene was already well established and had its subgenres as ambient industrial and power electronics. Oddly enough, PBK and Nocturnal Emissions were absent from my radar for some time; maybe the Emissions still are. I have no idea of how Ayers’ music developed post-2000. In 2004 he mailed two hours of source material to PBK, and some of it found its way to releases between 2004 and 2009. In 2021 PBk returned to the sources and recorded the nine pieces that now found their way to ‘Return Of The Monolith’. I am, therefore, sure that the music on this album tells me more about PBK than about the Nocturnal Emissions, but I should brush up on the latter for sure. Over the years, PBK refined his methodology, making an effective personal brand of the grey area where musique concrete and industrial music meet up. Stretching sounds apart, have these run around circles through what I assume is a laboratory of sound effects. I have no idea what the sound sources from Nigel Ayers could have been, and seeing this album comes 18 years after sending his material, and I wonder if Ayers could identify any himself. Maybe we should read something in the title of the LP; the monolith being Ayers’ original sounds and the erosion the processing PBK applies to the material? That could very well be the case, so I thought, and each of the finished pieces evolves around this erosion. Maybe the sources shine in some way, but the treatments obscure that? Again, I have no idea. Each piece seems to be detailing a few sources and offering a surprising amount of variation. The monolith is indeed reshaped into something else, and somewhat less of a monolith, and yet at the same time also minimal by itself. An LP of sturdy electronic music; noisy, ambient, concrete and refined. (Frans de Waard) 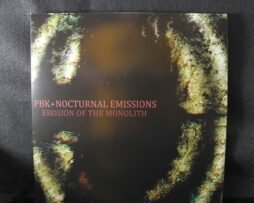 You're viewing: PBK + NOCTURNAL EMISSIONS – Erosion of the Monolith $28.20
Add to cart