Pearls Before Swine is here on DVD. What is Pearls Before Swine? Is it a controversial and iconoclastic look at the rise of a new form of fascism? The new film from Aussie director Richard Wolstencroft of Bloodlust fame? A rip-snorting ode to violence and sex in the tradition of A Clockwork Orange? The first feature film starring musician and philosopher Boyd Rice from NON? A radical change for the better in the recent lacklustre Australian film industry? A kick ass philosophical thriller about an assassin who is hired to kill an author of subversive literature? The answer is all of the above. And more. Read on if you dare.

The hit of the Stockholm International Film Festival, the Puchon International Fantasy Film Festival and the Sitges Fantasy Festival is here at last in an exclusive US DVD release. Yes, the movie that started a film festival, the Melbourne Underground Film Festival (www.muff.com.au) is here on DVD in a special edition packed full of extras, commentaries and an exclusive Making Of Pearls Before Swine documentary to entice, educate and excite. Usher in the New Dawn at home and see for yourself the first film shot beyond the realms of good and evil. A truly disturbing cinematic experience that shocked Australian critics, who were outraged by its blatant hostility to traditional societal norms. Be warned, this film is filled with much dark wisdom and misanthropy. Pearls Before Swine provides a valuable social, political and intellectual signpost toward a new non-racist yet still hierarchical political revolution of the Right, something director Richard Wolstencroft has called elsewhere “Transcendental Fascism”.

Featuring cameos from Douglas P. of Death In June, Ross Wilson from Australian band Daddy Cool, David Thrussell from SNOG, Soma and Black Lung, Paul and Andrew Haug from Australia’s national radio station 3JJJ, Phil Motherwell, author and playwright (considered by many to be Australia’s answer to William Burroughs), Kristen Condon from Teknikunst, George Huxley from Bloodlust, Jon Hewitt director of Redball, James Young from Bloodlust and Redball, Max Wearing from Occidental Martyr and Peter Weir’s Gallipoli and even the director himself, credited as Richard Masters… plus many others! See for yourself this controversial mini-masterpiece and travel with anti-cultural icon Boyd Rice on an unforgettable journey to the darker side of humanity. 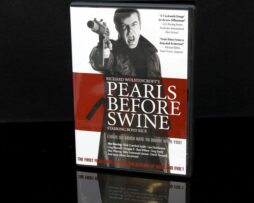