Making music almost always begins with playing an instrument or taking a sound that is already recorded and manipulating it until it suggests a space or a place or a landscape. Once there is the space created to work in it is a matter of populating that space with other sounds and elements. If they sound foreign and conflicting then there sometimes evolves a natural resolution and a balance between the different facets. A lot of the creative process is intuitive and spontaneous. The same can be said of painting. Filmmaking is a bit more deliberated but still has leaps of spontaneity involved. Usually these make the whole thing suddenly come to life.  — Robin Storey

Starting in 2005 with a DVD that came with 20 large Tarot-style postcards, and continuing in 2006 with a double 10 inch LP presented in an elaborately decorated wooden cover, Rapoon returns with the final chapter of his “Alien Glyph Morpholgy” tryptich, a limited edition CD presented in a hand-made tiger-print folder. As with nearly every Soleilmoon release, this CD is a collectable art object, and indeed, like snowflakes, no two are exactly the same. Compared with the vinyl edition, two tracks are extended in length, and a previously unavailable song, “Condensed Nightmares” has been added as a bonus track.

These days nearly all compositions are subconsciously referenced to the length of the average CD, but the vinyl version of Alien Glyph Morphology has been edited with the time frame of a vinyl record in mind. Play it on a record deck and it will sound different because of the nature of the medium. When I heard again the sounds coming from the old record deck and the vinyl out in the garage, I immediately started making samples to manipulate and incorporate in future compositions. The sound of vinyl is inspiring. — Robin Storey

Aliens, ancient glyphs, UFO’s, man’s search for meaning in a world where there is none, just one aspect of the human condition.  I hope my work is about “being human” with all its faults, frailties, hopes, dreams, disasters, loves, hates and complexities. There are no answers, just more questions. — Robin Storey 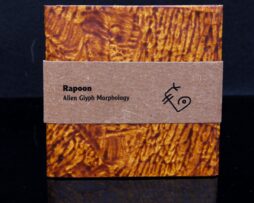