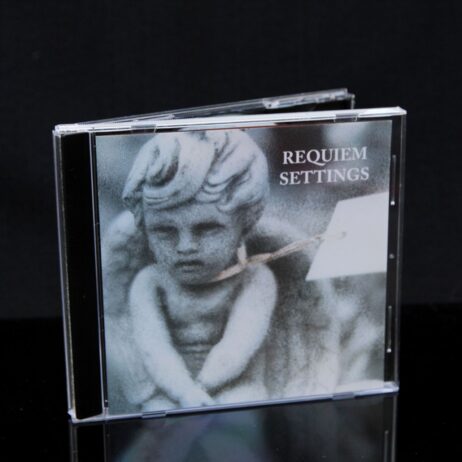 ARTIST’S STATEMENT: “While early glitch music experiments were the central feature of “Dream Cell’s” stylistic mix, its successor “Silvermandalas” concentrated on drone and trance directions.  By contrast, “Requiem Settings (1-6)” is a more linear work, with a greater emphasis on subjective association. Despite the title, a September 11 Requiem it isn’t – at least not by design (the CD was already completed by the time of the attacks in New York and Washington).  Two factors determined the project’s theme: my father’s death, and the place where I lived at the time these recordings began.  I was renting an apartment amongst the rolling hills of Groesbeek in Holland, and after finding two WW II grenades (one German, one American) in the woods behind the house, I began to discover the significance of the area.  These killing fields marked the battles that began Europe’s liberation from the Nazis.   Two metal fragments, possible shrapnel) discovered in this same area revealed a pleasing bell-like quality when struck together.  This bell-tine provides the static association in “Requiem Settings”, while the train sounds heard throughout the work represent the aspect of movement – the sense of journeying to another existence.  This sense is never more apparent than in the final setting – the Requiem itself, where the choirs drift in and out of radio static, all the time underpinned by a grandiose musical funeral procession.  The CD’s opening meditational settings feature the bell-tone bobbing back and forth like a buoy on an estuary, amongst a landscape of distant foghorns. America is peppered with towns brought into existence only through virtue of crossing rail lines, and the immense foghorn sounds of these huge freight trains dominate these places.  Forget it if you’re a travelling musician hoping for a good night’s sleep…not even ear plugs help as the very walls shake with each passing train.  On my trips around America  I became enchanted by the distant sound of these train foghorns reaching my ears in the still night air.  The resonance of these sounds in the vast landscapes of the American continent seem to extract physical characteristics of these huge open spaces, making them audible to the discerning ear.   In a very real sense this acoustic phenomena could be said to be the “Sound of America” – not of it’s people or cities, but of the physical landscape itself. The CD’s third setting is similarly born of the American landscape, but this time one of a particular nature.  Long fascinated by one of America’s best known historical figures, Chief Joseph, I was given the opportunity to spend time in his former heartland of Wallowa, Oregon.  While staying there, I set about making further recordings.  On a clear full moon night, in a landscape covered in snow, the undertaking took on surreal and magical proportions where nighttime was like day and I wore sunglasses to protect my eyes from the intense sparkle and shimmer of the moon’s reflections in the snow.   Strapping microphones to my boots, I embarked on a walk to capture the vivid and sumptuous sound world of pressed fresh snow and cracked ice.  Back home in Holland, I completed the piece using an American instrument invented in Chief Joseph’s time – the Appalachian dulcimer.  Using electronics to sound a dulcimer chord in the exact rhythm of my recorded footsteps, I then added played dulcimer melodies to finish the track.  Long after the piece was completed, I learned how Joseph and his people were pursued and hunted by U.S. troops in a 1200 mile flight of exodus from the Wallowa valley.  Unintentionally, my snow walk at Wallowa became a sound metaphor of this exodus.”  – Silverman