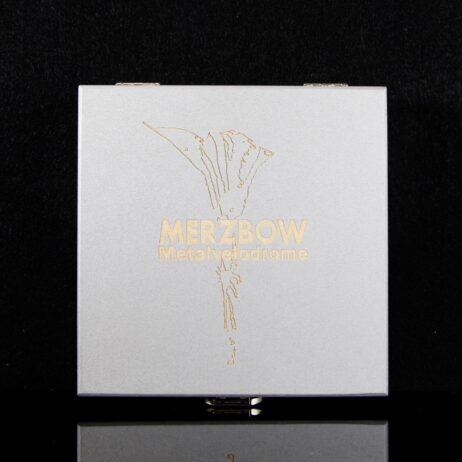 Merzbow stands as a leading artist in the genre of noise music. Masami Akita began his solo project in Tokyo in 1979. Inspired by dadaism and surrealism, Akita took the name Merzbow from German artist Kurt Schwitters’s pre-war architectural assemblage “The Cathedral of Erotic Misery”, or “Merzbau”. Just as Schwitters attacked the entrenched artistic traditions of his time with his revolutionary avant-garde collages, so too would Akita challenge the contemporary concept of what is called music. Merzbow would draw further influence from the futurist movement. Not only would he embrace the futurists’s love of technology and the machine civilization, he would push their fondness for noise to the very boundaries of the extreme. Working in his home, he quickly gained notoriety as a purveyor of a musical genre composed solely of pure, unadulterated noise.

By the 1990’s, Merzbow had a significant underground reputation for creating harsh power electronics albums. “Metalvelodrome” was originally released in a four CD box in 1993 by the fabulous Japanese label Alchemy. The tracks fall between the atmosphere of Merzbow’s early 90’s work and his more hyper-aggressive mid 90’s power electronics, and it’s a charming mix, presenting the listener with some of the best elements from each phase of his evolution. Along with “Noisembryo”, “Venereology” and “Pulse Demon”, it represents the pinnacle of the artist’s immense body of work. All tracks were performed using cheap electronics and junk, without synthesizers or midi sampler. Remastered and revised without the two live tracks from the original release, but with four bonus tracks recorded at Munemihouse in 2019.

This reissue comes in a silver-printed wooden box with laser engraving of original artwork cover on front (and inside the lid) and Urashima logo on back. Each single CD inside the box box comes in a cardboard sleeve with new artwork by Masami Akita, and there’s a folded poster and a numbered certificate. Limited edition of 500 copies.