NOTE: MOST OF THE REMAINING STOCK OF LPS HAVE JACKETS WITH SMALL INDENTATIONS IN ONE OR TWO CORNERS. PLEASE SEE GALLERY PHOTO (WITH BALLPOINT PEN FOR SCALE) FOR ONE OF THE WORST EXAMPLES. MOST OF THE JACKETS ARE NOT AS BAD AS THIS ONE!

It’s by some strange inversion that since his untimely death in 1999 Bryn Jones’ Muslimgauze project has become evermore enigmatic as his publicly available recordings have become evermore vast. The Mancunian artist’s sudden passing at the age of 37 prematurely resolved a body of work that remains as experimental as it is diffuse, with an informal archive that was left spread between favoured labels and confidantes. And though this monadic project never abided by genre specifications, it all feels as if it is taking the critical pulses of its time and rendering them into something other than the sum of its obscure compulsions. Jones’ double album ‘Veiled Sisters’ from 1993 is no exception, and it persists as a magnificent outlier in his singular and bewildering discography.

Originally released by the label Soleilmoon, an early and lifelong supporter of Jones’ work along with Staalplaat, the album is a notable example of the uniquely recombinant fragility and fervour of Jones’ work. This 3LP edition marks the album’s first appearance on vinyl. Like much of the Muslimgauze catalogue, ‘Veiled Sisters’ is dedicated to the Palestine Liberation Organization, with its two halves—Sister One and Sister Two—calling on the history and conflicts of the modern Islamic world through opaque titles and snatches of musical oration.

Forgoing the raucous timbre and abrasion that Jones could occasionally employ, this album balances a medley of shrill instrumental bursts with a complex patterning of ambient atmospheres. ‘Veiled Sisters’ moves with a hypnotic gait across its extended runtime with a dynamic ensemble of electronics grounded in a pulsing yet evasive combination of low-slung kicks and dub-soaked bass. The hissy wash of drums, both played and machined, decorate a restless patina all over, and the cacophony of samples send impressions scattershot into Jones’ idiosyncratic yet readymade psychedelia. With a quiet intensity that is not often captured this succinctly in the Muslimgauze catalogue, this new edition of ‘Veiled Sisters’ is a reminder of the haunting wonder that Jones was capable of manifesting. 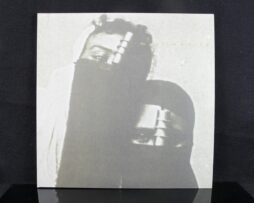